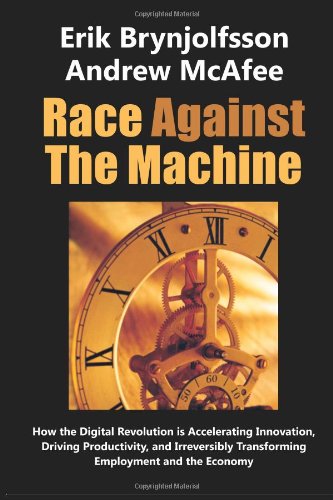 Race Against the Machine

Why has median income stopped rising in the US? Why is the share of population that is working falling so rapidly? Why are our economy and society are becoming more unequal? A popular explanation right now is that the root cause underlying these symptoms is technological stagnation– a slowdown in the kinds of ideas and inventions that bring progress and prosperity. In Race Against the Machine, MIT’s Erik Brynjolfsson and Andrew McAfee present a very different explanation. Drawing on research by their team at the Center for Digital Business, they show that there’s been no stagnation in technology — in fact, the digital revolution is accelerating. Recent advances are the stuff of science fiction: computers now drive cars in traffic, translate between human languages effectively, and beat the best human Jeopardy! players. As these examples show, digital technologies are rapidly encroaching on skills that used to belong to humans alone. This phenomenon is both broad and deep, and has profound economic implications. Many of these implications are positive; digital innovation increases productivity, reduces prices (sometimes to zero), and grows the overall economic pie. But digital innovation has also changed how the economic pie is distributed, and here the news is not good for the median worker. As technology races ahead, it can leave many people behind. Workers whose skills have been mastered by computers have less to offer the job market, and see their wages and prospects shrink. Entrepreneurial business models, new organizational structures and different institutions are needed to ensure that the average worker is not left behind by cutting-edge machines. In Race Against the Machine Brynjolfsson and McAfee bring together a range of statistics, examples, and arguments to show that technological progress is accelerating, and that this trend has deep consequences for skills, wages, and jobs. The book makes the case that employment prospects are grim for many today not because there’s been technology has stagnated, but instead because we humans and our organizations aren’t keeping up.